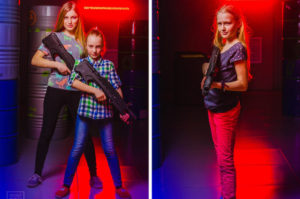 Laser tag is a military sports game similar to paintball. The task of the player is to hit the opponent with the help of an electronic weapon (blaster), shooting with infrared rays, which are used in TV remote control. Hits are fixed by some sensors, which is put on the vest of each participant.

Laser tag is a fascinating contactless, and therefore a safe form of activity. Markers and tags (weapons) allow you to “hit” the enemy at a distance of up to 200m, which gives the game a special realism. At the same time, although the word “laser” is present in the name of this entertainment, in fact, a focused infrared ray is used, which means that it cannot cause any harm to the child’s health.

What is the whole point of the toy? First of all, the laser tag is a team game simulating combat operations, in which two or more teams take part. The beam sensor of the enemy’s marker instantly fixes the hit and excludes any possibility of fraud. Every time after the hitting, the player feels a vibration pulse.

Laser Tag Set for Children with Vests and Guns

Laser equipment works remotely, without wires, large and heavy power supplies. There is nothing to shackle the movement of the player. Everyone can absolutely freely move around the arena, hide in cover or suddenly attack an opponent.

The game scenario may require you to set a different number of lives or limited ammunition. All this is available in the arsenal of most types of laser tag weapons. A clear fixation of the hit is one of the main advantages of the laser tag.

Unfortunately, even the brightest photos of the laser tag cannot convey all the strengths of this toy. A special sound block is installed in a weapon for laser battles, which accompanies each shot with a realistically loud salvo or burst. This not only makes the game more dynamic and exciting but also adds realism.

Our store provides warranty, after-sales service and the opportunity to test equipment. There are models of assault rifles, guns, sniper rifles, and shotguns. Children really like this type of entertainment. They develop their muscular and skeletal systems. Laser tag is a useful alternative to sitting in front of a PC monitor.